Defining moments of Hatched Part 1 – The Night in the Trafalgar

At the beginning of this year (2016), Hatched officially turned five years old. It was five years ago that we stepped out of the (glamorous, safe, large) doors of JWT London in Knightsbridge Green, along with former colleagues Andy Cridland and Gary Fraser, out into London and indeed into the world to establish Hatched as a full-time, fully fledged (ad)venture.

Our aim when we started was to harbour and harness ‘big agency thinking’ without the big agency price tags. To help smaller businesses who don’t have marketing departments of 20+ or budgets in their millions to immerse themselves in their markets. Ultimately, we wanted to work with independently minded people and their independently minded brands – people and brands that had a firm set of beliefs and a devotion to what they do, but wanted to do something differently, to challenge their audience(s) and competitors.

Our agency has gone through a lot of changes in our short five years; many ecstatic highs and some harsh lows; a few fond farewells and some warm welcomes; moves across London and back again; stand-up rows to full-on, overindulgent, overexcited man hugs. However we may have grown, however many times we’ve been through the mill, we’ve always remained true to our original intention. And after five years, that’s some achievement.

On our journey so far there have been a few landmark occasions at Hatched that have essentially defined our existence. In a series of five posts we look back at some of those moments, starting here with the Night in the Trafalgar.

Those first steps out of the doors at JWT didn’t come as a knee-jerk reaction to an idea we had down the pub – far from it. There was no grandiose, on a whim, Jerry Maguire moment. It took planning and a lot of it. We had to prove not only it would work, but we could work together outside of the comfort of JWT, outside of our core team dynamic and outside of large agency team support. In fact, the decision to set up Hatched came about 18 months earlier.

What drew Andrew, Andy and myself together, first and foremost, was our love of design. We also shared a ‘big ambition’ to go out on our own and make something of ourselves. We’d been working together on pitches and large scale projects for RMG and JWT (and previously at Claydon Heeley) and so it was naturally quipped “we should start our own company” through wry smiles. Incidentally, Andrew had already established a trading name Hatched Ltd (credit for the name goes to his wife Jacqueline) to handle non-compete print clients, which Andy had been handling the design for in his spare time. It was a ‘side project’, but a project that had legs.

More small jobs turned into slightly bigger jobs and then into large paying jobs, and before we knew it Hatched was becoming a serious conversation. One that excited all of us. We were suddenly talking about positioning, mantra and a lot of ‘what ifs’, and thinking about a brand roadmap – a roadmap strewn across a bloody great big Gantt chart – the wheels were starting to turn.

Meanwhile, somewhere across the office Andy Cridland and Gary Fraser were devising a similar plan, although focused on brand planning and advertising. So Andy and Gary proposed that we join forces and bring the offering together, creating a full-service start-up, utilising a five pointed star shaped team that had plenty of experience working together as a unit across global brands such as HSBC, Shell and Nokia (in their pomp).

However, the big decision to green-light Hatched came on an impromptu night out where Andrew, Andy and I sat talking through everything in the Trafalgar Pub on King’s Road. We’d started out wanting to be a small ’boutiquey’ design and production led service, now we were talking about a 360°, all encompassing, all singing all dancing creative agency. Something much harder to pull off, but something that would offer our would-be clients a lot more. Plus, the experience that we’d all bring to the table meant more knowledge, skill and more hands on deck.  It gave the agency larger shoulders to carry the load, to cry on and support each other. We were all going together as a team, none of us were alone.

We agreed that this was the best way to get Hatched out the door. We were all on board with this small time merger and ready to get started. That’s where Hatched was truly born and there was no turning back. Let me tell you, the adrenaline rush was immense.

Something we now talk about internally, as our own mantra, is ‘no one cares more than us’. We apply it to all projects we work on. It’s funny looking back that that’s exactly what we talked about on that night in the Trafalgar. We may not have been able to compete with our forefathers, the likes of JWT, Claydon Heeley (RIP), TMW and so on, but we would make sure that no one would care more than us about our clients, their audiences and, most importantly, the work we did for them.

What came after that night, amidst a massive recession, was a huge learning curve; months and months of stress, fatigue and difficulty, but a ridiculous amount of excitement and fun that collectively shaped those first steps out the door.

You often hear the term ‘the first step is the hardest’, but honestly it wasn’t. It was easy. We had carefully planned for that. We had Hatched in a place where we could guarantee that level of care, guarantee that level of service, and still remain true to our initial proposition of working with independently minded people and their brands.

The irony is that after all that hard work, it was only the beginning…

The view from the first proper Hatched HQ on Union Street. 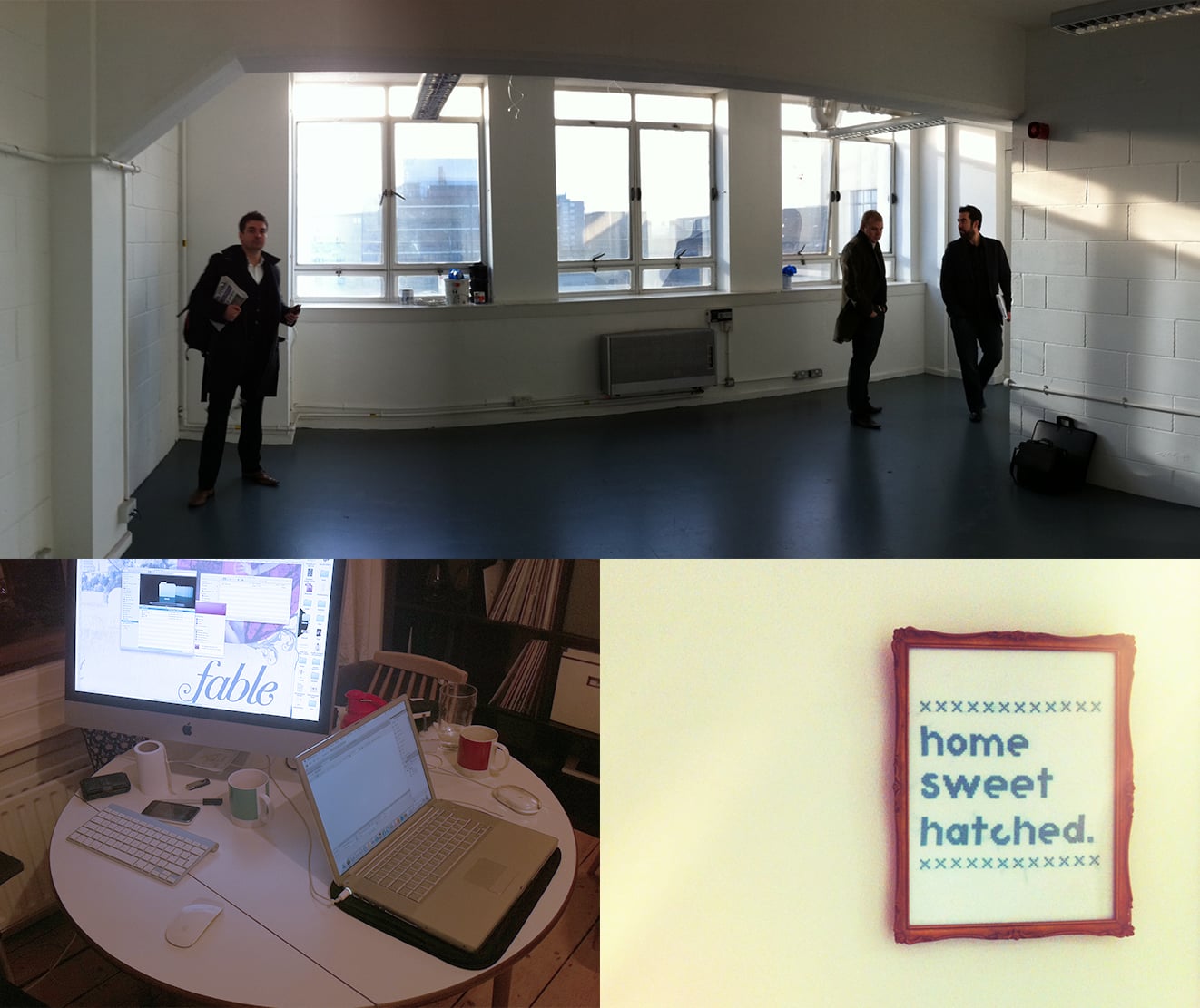 Looking for our first home, working in Andy’s flat and our sign for the door.