As designers, it can sometimes be hard not to feel at odds with the environment. A lot of what designers and advertisers do is create and shape desires – whether it’s the product designer working on the next iPhone to keep the economy rolling along, to the advertiser enticing the public to feel dissatisfied with what they’ve already got – and the more people desire, the more devastating their impact on the planet.

Therefore, I thought it would be interesting to take a look at just a few of the many ways that designers are making a positive environmental impact on society and on the planet.

A question that came to mind was whether it was design’s job to take the pain out of people’s attempts to lower their environmental impact – or even better, to guide people there effortlessly, such as quietly replacing plastic straws with seaweed ones.

Whilst policy can alter behaviours by creating monetary incentives, such as the astonishing effect that the 5p bag charge has had in reducing the number of plastic bags used by by 80%, design is tackling the issue by offering people alternatives which mean they need not even lower their consumption to lower their effect on the planet.

A really exciting new field is biodegradable packaging. Whether it’s created from mould or algae, the adoption of this by big manufacturers could save millions of tonnes of plastic from entering the ecosystem each year.

Over the pond in New York, the design studio Crème have been busy creating water vessels out of gourds, grown in moulds so they create uniform cups and jugs:

“[We] identified gourds as a fast-growing plant that bears robust fruits each season, developing a strong outer skin, and fibery inner flesh. Once dried, gourds have traditionally been used by ancestors as receptacles like cups. Crème explored this centuries-old craft, using moulds to grow gourds into functional shapes, such as cups and flasks to create sustainable, renewable, and compostable products without waste.”

Another innovative solution is the number of seaweed-based packaging solutions springing up. As wired optimistically states:

“In 2018, seaweed, which can grow up to three metres per day, will emerge as an alternative raw material to oil… This year, we will see seaweed-based products everywhere. And we will question how it was ever considered acceptable to simply throw away plastic bottles.”

One company making this dream a reality are Skipping Rocks Lab who have invented an edible water globe called Ooho. It is made from 100% plants, completely biodegrades in 4-6 weeks (the same as a piece of fruit), is cheaper than plastic and uses 9 x less energy than PET plastic. Oh, and it looks awesome. Hooray for design making being eco a total joy. 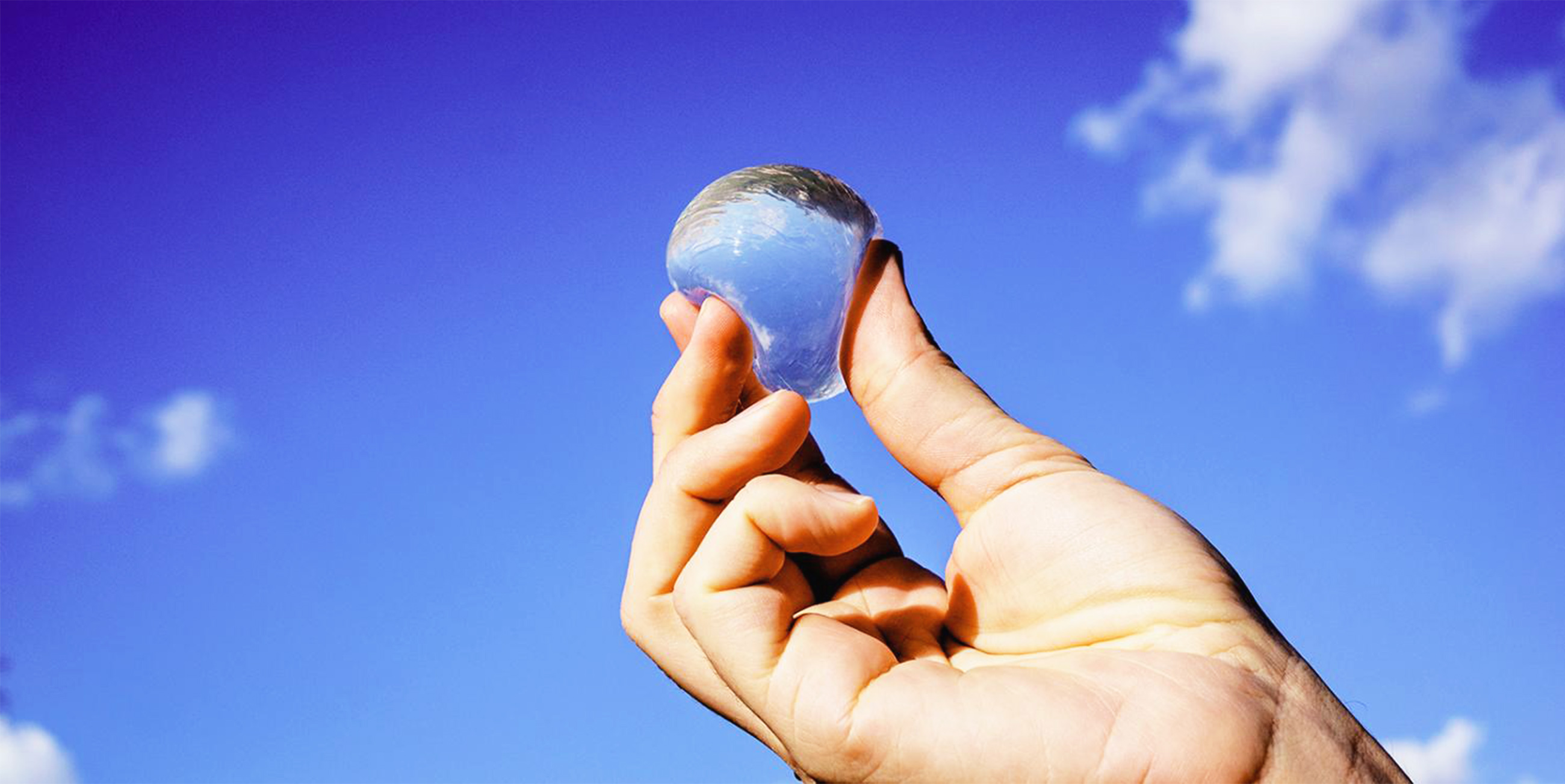 On the other end of the spectrum, graphic design is being used to visualise the destruction being wrought on the planet, making us stop in our tracks and think. Notably, WWF have used heavy-hitting imagery to get their message across.

It could be argued, however, that campaigns such as these are preaching to the converted – those that don’t care will just dismiss them and fail to see (or care) about how their own actions impact the wide world around them.

Yet, whilst campaigns focusing on the global-level impact of climate change are imploring us to ditch the single-use plastic, product designers are busy at work conjuring up single-use forks made of algae that biodegrade faster than you can say ‘can’t you just bring your own fork?’. Rather than guilt trips, what we really need are practical, everyday solutions, and luckily designers love nothing more than a problem.

One beautifully innovative solution has been Dutch designers Eric Klarenbeek and Maartje Dros development of a bioplastic made from algae (an especially interesting new material as it absorbs large quantities of C02 during its production, converting it into a starch). It can be 3D printed and they hope that it could eventually replace synthetic plastic. The objects, shown earlier this year at an exhibition called Change the System in Rotterdam, are beautiful objects in their own right, but the designers hope that their creations can move from the realm of art to that of the everyday, replacing everything from shampoo bottles to rubbish bins.

As well as using sustainable materials, packaging can effect positive change by moulding perceptions around the things we consume. A recent, notable example is that of Beyond Meat, an exciting new company that has just launched in the UK.

Aside from having an amazing product, Beyond Meat’s innovation is to brand, and physically place in-store, their products alongside real meat. Designed by Bulletproof, their packaging, replete with a chunky, distressed letterpress typeface and butcher-esque cues that would not look out of place being brought along to a BBQ, takes vegan ‘meats’ away from the stereotype of snowflake millennials and self-deprivation.

A small behavioural change, such as people doing Meat Free Monday, would have a huge impact when you consider that 51% of global greenhouse gas emissions are driven by livestock rearing and processing.

Therefore, the global impact of making meat substitutes more socially acceptable and more appealing to the growing demographic of ‘flexitarians‘ shouldn’t be under-estimated. Additionally, a positive feedback loop is created; as the products get more popular, the design budgets increase, which in turn enables an increasingly appealing mainstream look.

Aside from vegan brands, many new start-ups and products are taking an increasingly holistic approach to their brand story and conduct, and placing wellbeing at the centre of all they do. An example of this is Johnny Wilkinson’s No1 Kombucha brand, which we worked on this year. Part of the brand’s vision is to ‘Live though peace and compassion’, which encompasses connecting more deeply to the environment and those around us. It follows, therefore, that No1 Kombucha uses packaging that is 100% recyclable, as well as using recycled glass rather than plastic.

What I find interesting is that it is becoming evident that being environmentally conscious is part and parcel of one’s personal sense of wellbeing – and that brands are harnessing this. For brands whose focus is their consumers’ sense of wellbeing, using unsustainable plastic is simply poor business sense.

If you’re a fan of both design and the environment keep an eye out for my next post where I’ll be looking at how the print industry is innovating itself to help lessen its impact on the environment – and making some stunning products in the process.