Flat design has ruled the roost many years now, with nearly all brands rethinking their 3D logos in 2D. Over the last few years gradients have become a widely accepted way to add a bit of depth and interest to these 2D graphics, so it’s not surprising that we’re seeing a number of high profile rebrands using this winning combo of flat shapes and depth-giving gradients.

One of the most notable rebrands this year was Instagram who went from their retro skeumorphic camera to a minimal flat gradient in one massive leap. Predictably, a lot of people freaked out but it’s been generally well received. Ian Spalter, Head of Design at Instagram, says,

“When we started reimagining the rainbow, we looked at more minimal options, but ultimately we needed more warmth and energy to complement the glyph.”

The new logo certainly exudes warmth and has that aspirational feel that Instagram’s all about, seeming to be a fusion of every balmy sunset shot ever posted with #nofilter.

Gradients are especially popular for entertainment brands, including Freeview, Sky and potentially now BT who have just trademarked a new gradient logo.

Colour gradients are suitably vague yet evocative; they can represent an ‘infinite’ range of things to experience across the channels without being limited to finite colours and thus options. Freeview’s rebrand by DixonBaxi nods the brands’ heritage by including red in the logo, but, as Aporva Baxi, the Creative Director, explains:

“The other colours suggest the diversity that the product offers as a platform. It’s really important to have a human touch.”

Another notable gradient is Pantone’s Colour of the Year 2016, which, for the first time in history, is actually two colours meeting in a lovely 90s-tinged gradient. Read more about it here in Naomi Bassey’s blog post. Pantone describes its choice as reflective of consumers’ desire for colours that “psychologically fulfill our yearning for reassurance and security” – which are often times achieved by a balance of two or more colours: “Rose Quartz and Serenity demonstrate an inherent balance between a warmer embracing rose tone and the cooler tranquil blue”. So could it be that gradients have a greater emotional impact than flat colours? 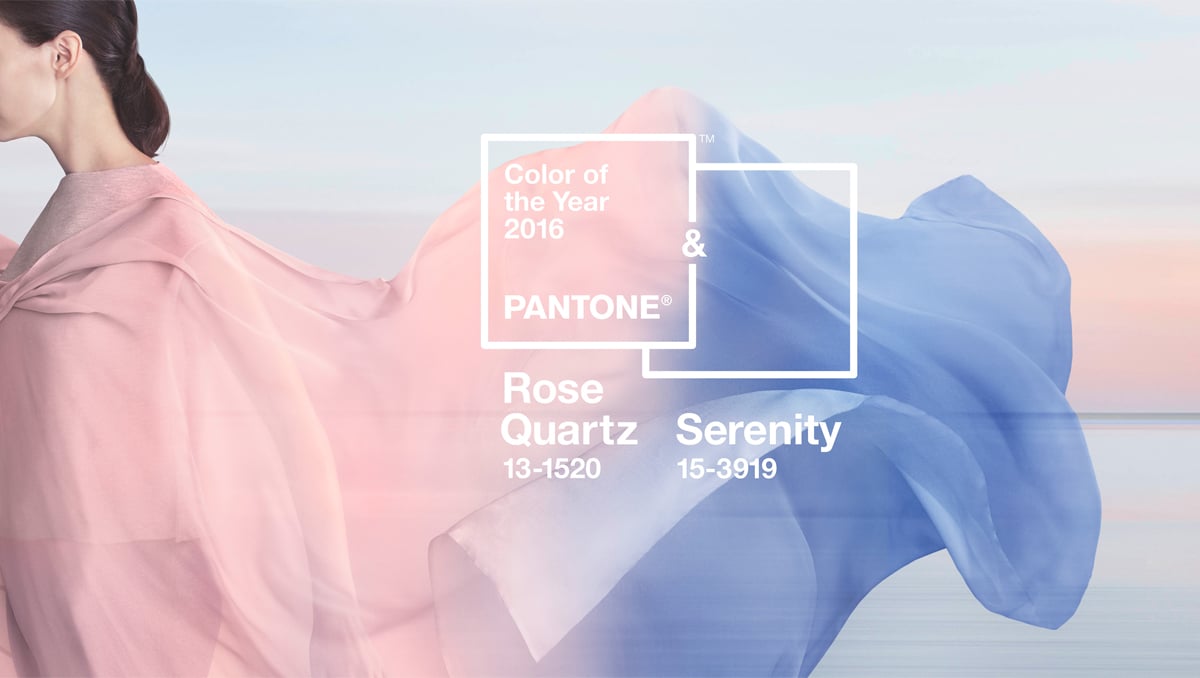 Earlier this year we went along to, and subsequently had our minds blown by, yellowbluepink, by Ann Veronica Janssens at the Wellcome Collection, which was part of the gallery’s ‘exploration into the experience of human consciousness‘, an installation where a room was entirely filled with brightly coloured mist. It truly felt like an Original Experience, a massive immersion tank where the experience of colour was heightened by the deprivation of depth perception (i.e. I couldn’t see my feet). I had never had my senses entirely flooded by colour and the most emotionally impactful part of the experience was transitioning from one colour area of the room to another; from hot pink to cool blue. I suppose, because our moods are never static, gradients better represent the shifting, multi-faceted nature of human emotions. 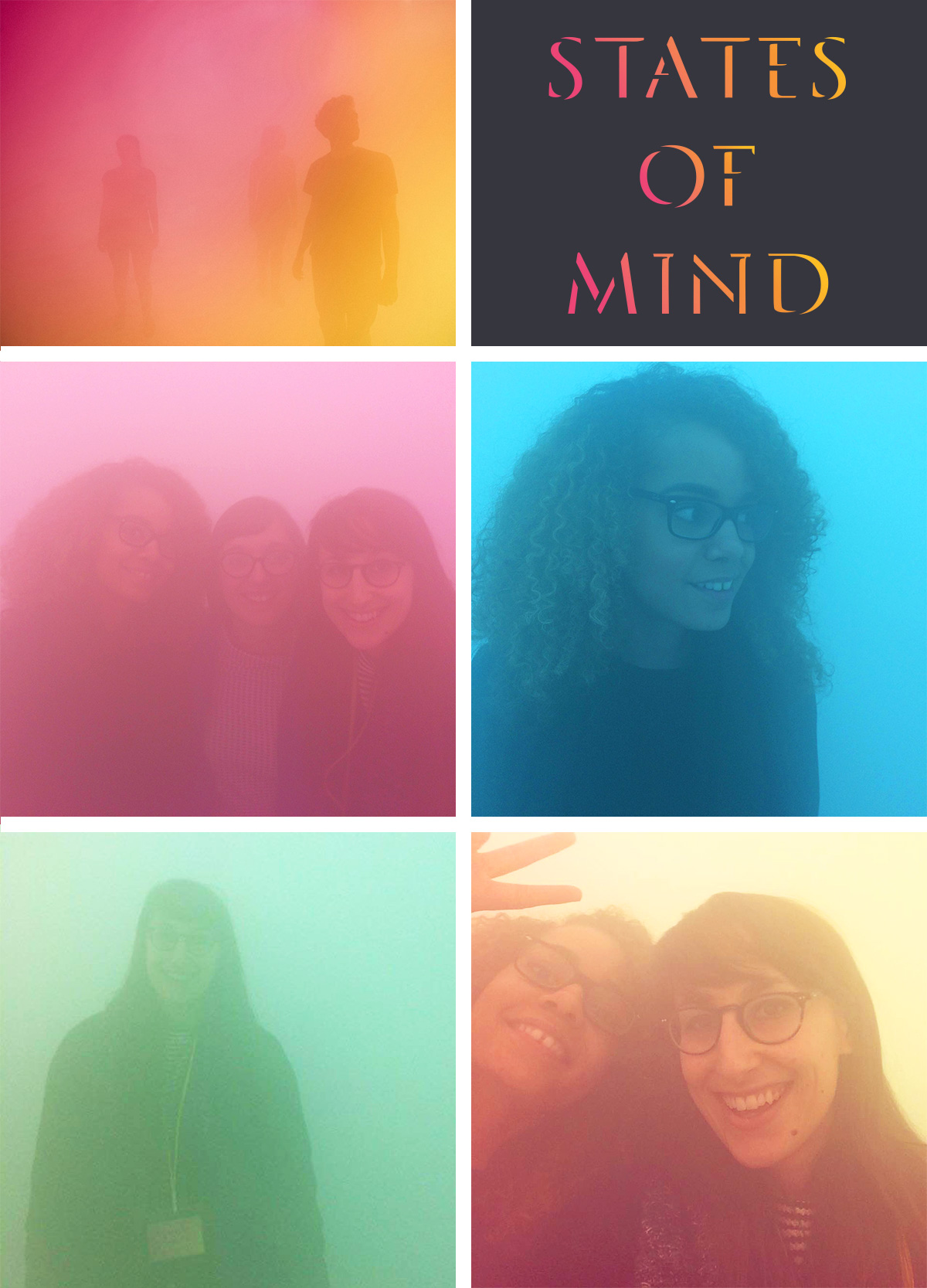 This complexity of emotion was perfectly summed up by Pixar’s Inside Out which is largely set inside the mind of an 11-year old. At the beginning of the film her memories are represented by single coloured glass orbs, blue for sad, yellow for joyful, but by the end of the film she’s transitioned to adult emotions and is forming memory orbs tinged with many emotions – forming beautiful multi-toned gradients.

Speaking of colours evoking moods, it’s interesting that both Spotify and iTunes have utilised gradients for their branding. iTunes’ soft haze of blue, pink and purple speaks to youthful social media filters as well as feeling reminiscent of blurred together stage lights.

Spotify’s 2015 Year of Music was a brighter, intense duotone filter that could be applied to any photo to give the whole set a unified look and feel – something that would be highly challenging when there’s a whole world of music photography and album covers out there.

Speaking about this challenge, Leland Maschmeyer, Executive Creative Director at Collins, the NY agency that rebranded Spotify in 2015, explains:

“The answer came from a deep dive into music history, in the duotone photos from album covers and concert posters from the 1960s… That aesthetic could be applied to lots of different types of photography, so even though the pictures were shot in different styles, and by different photographers, when you put them through that filter, they all hang together.”

These treated photos look particularly striking when paired up with complimentary gradient elements. 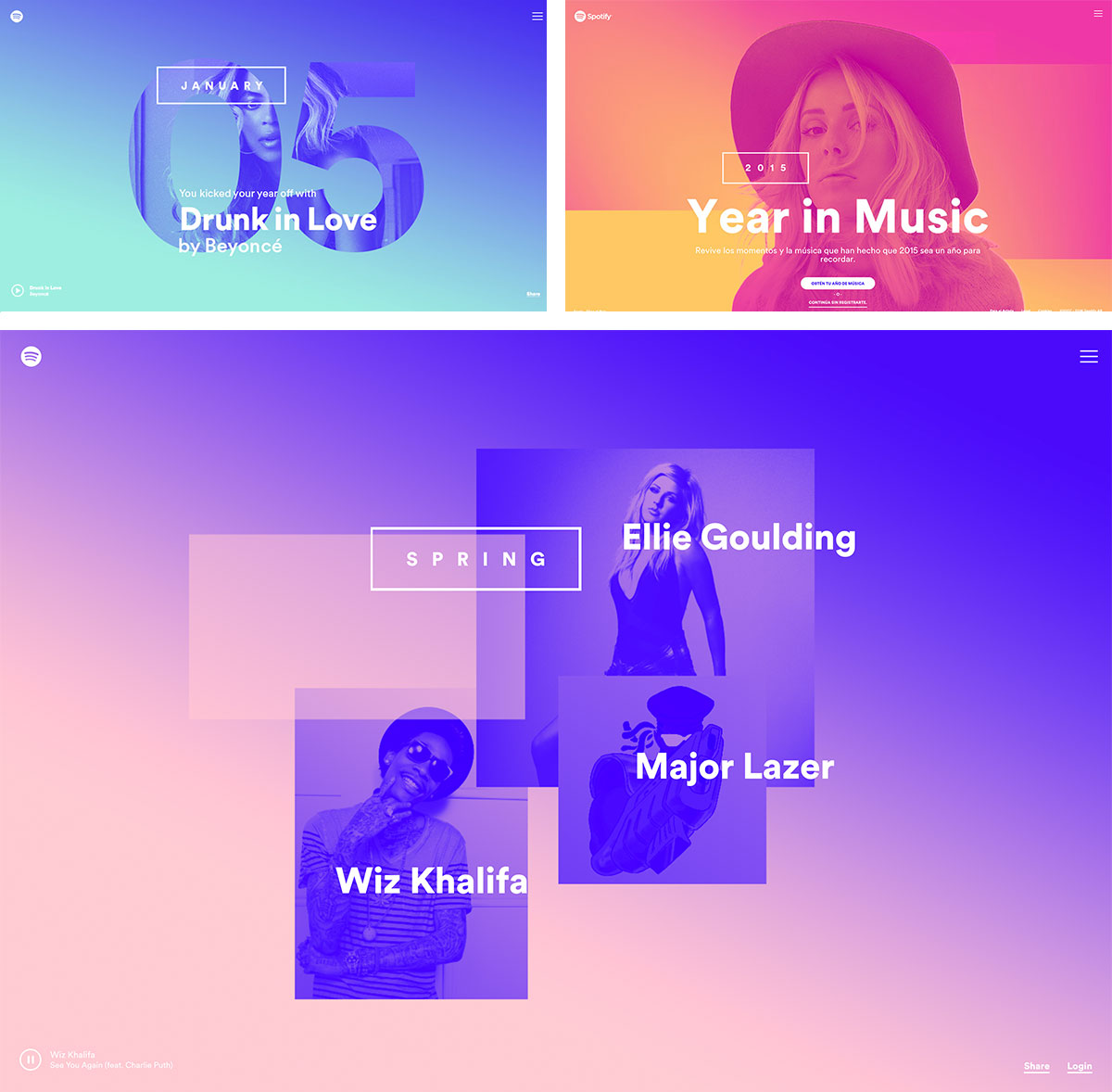 A recent project using duotone gradients to exquisite effect is ‘Ten‘, a print series created by ManvsMachine to celebrate their 10th major project collaborating with Nike. It comprises of a set of stunning, minimal artworks using a red and blue gradient to subtly represent features of their past projects with Nike. 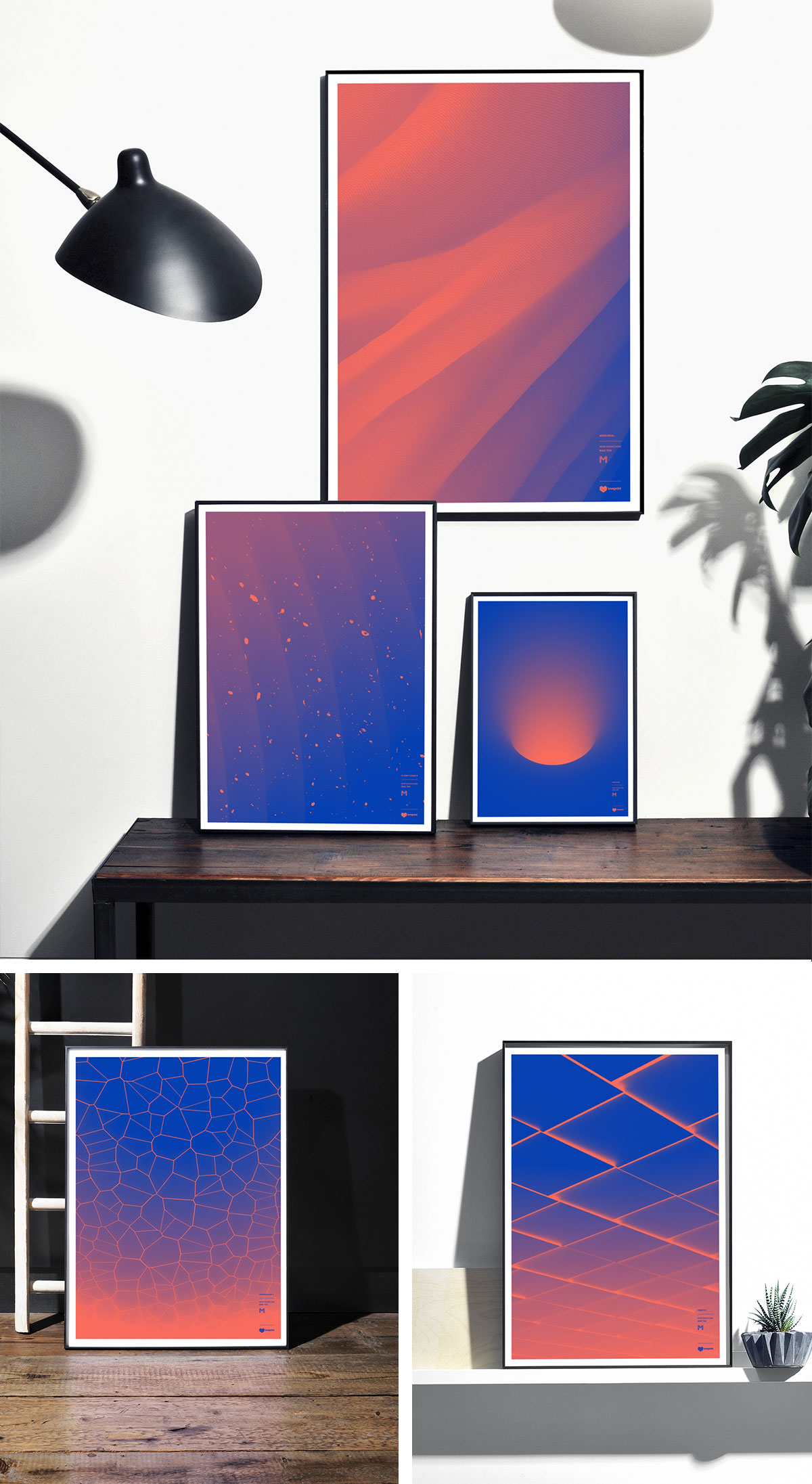 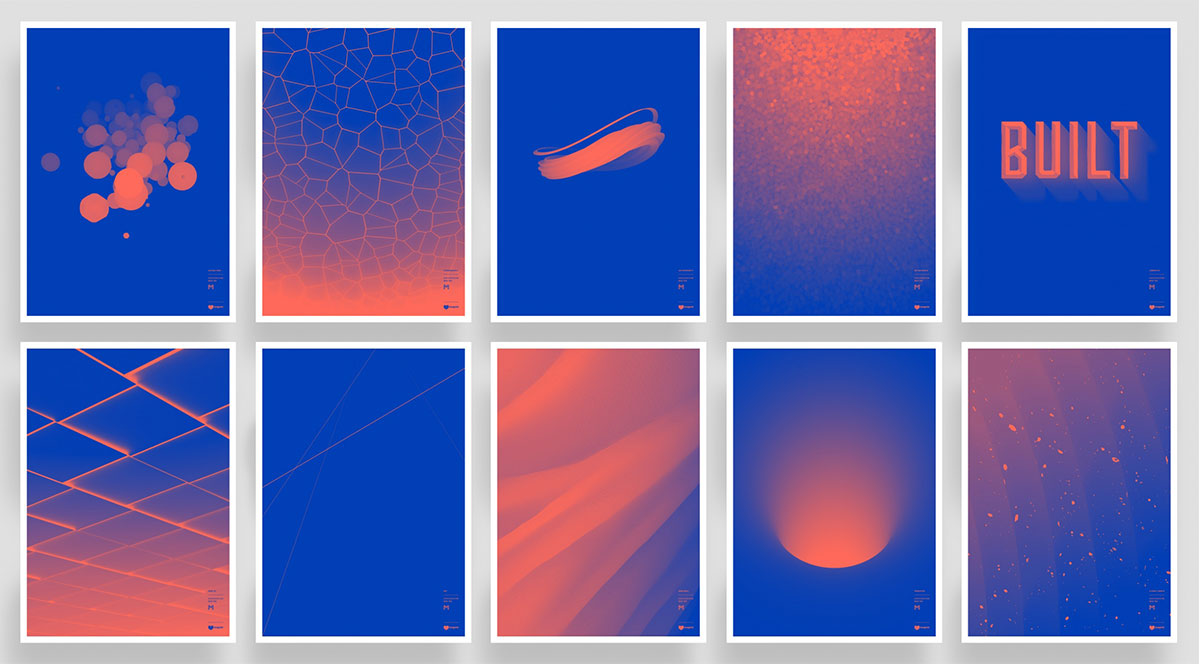 Futurebrand launched the Natwest rebrand a few days ago using an interesting mix of ‘flat 3D’ graphics and a subtle gradient in their logo, that also achieves depth without being skeumorphic.

There are so many beautiful, joyful works using gradients currently, some of which have been showcased wonderfully by Spoongraphics in this fantastic blog. Here are a few of our favourites. 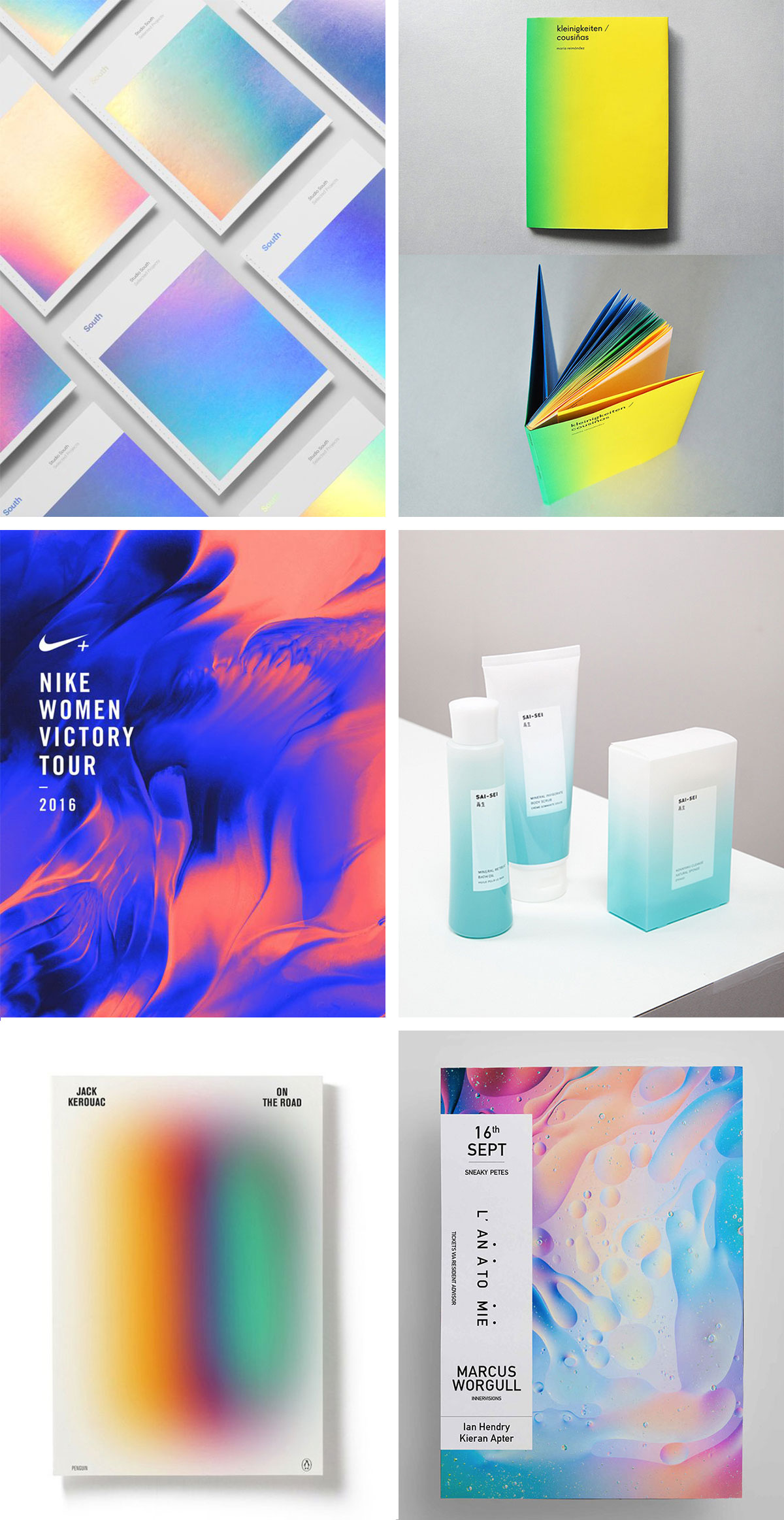